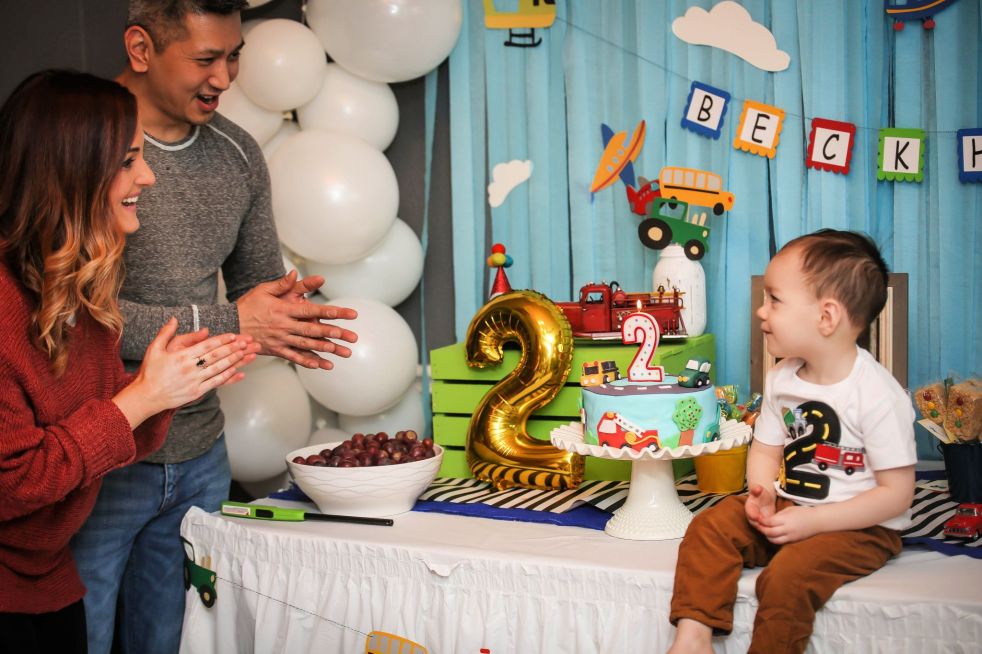 I seriously can’t believe it has already been six(ish) weeks since we celebrated Beckham’s 2nd birthday with family and friends. I think I say this every time, but time.is.flying. Beckham has been obsessed with cars, buses, fire trucks, airplanes, and all other forms of transportation in between, so deciding a theme was a no-brainer. Watching Beckham’s excitement at all the little details is what made planning this party so much fun. 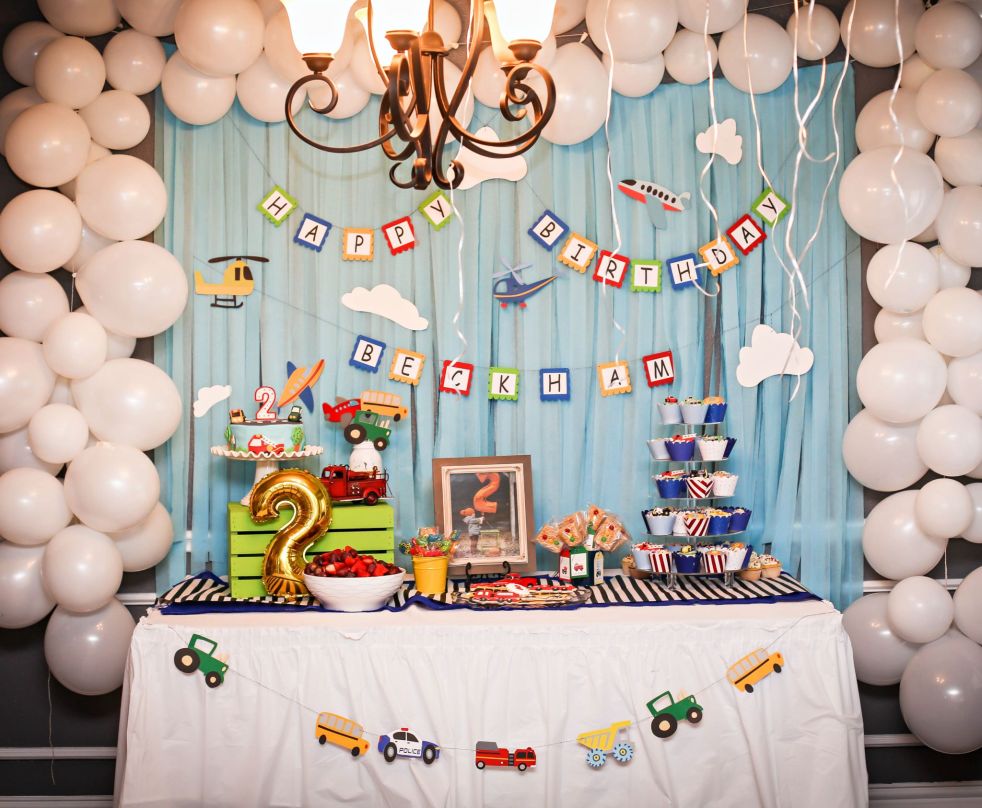 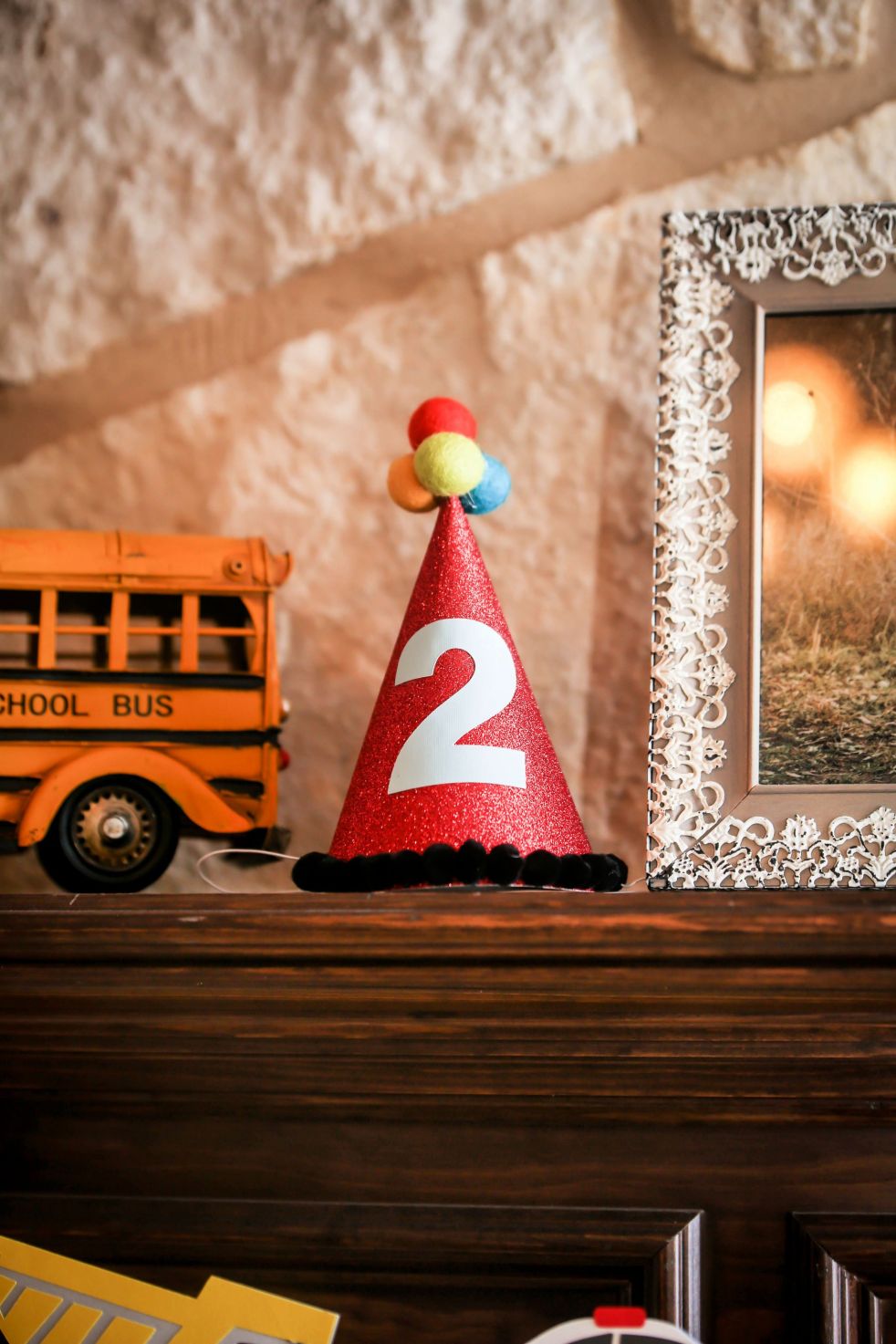 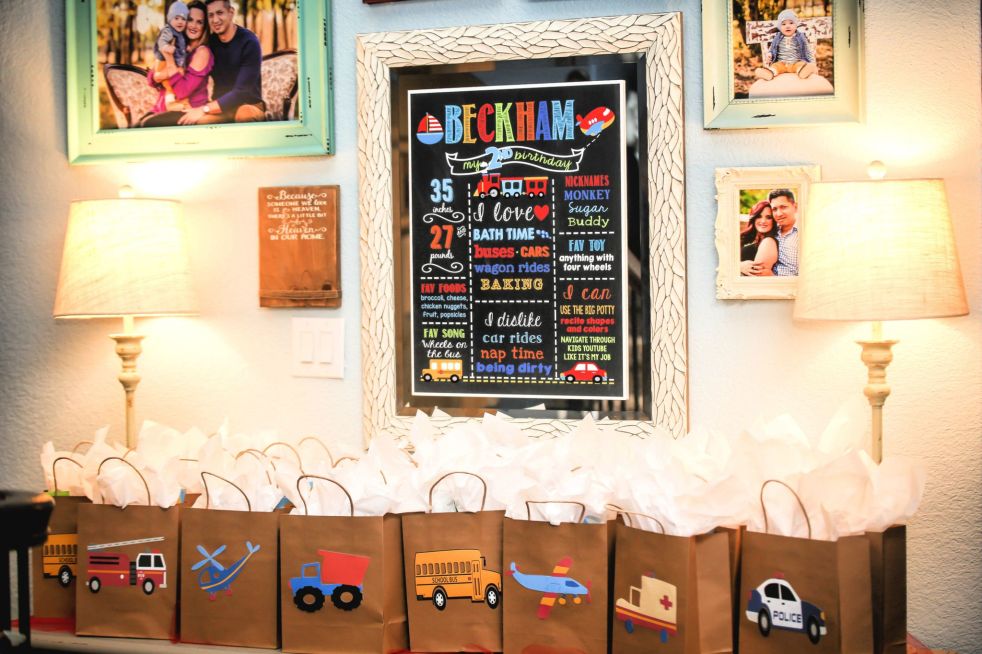 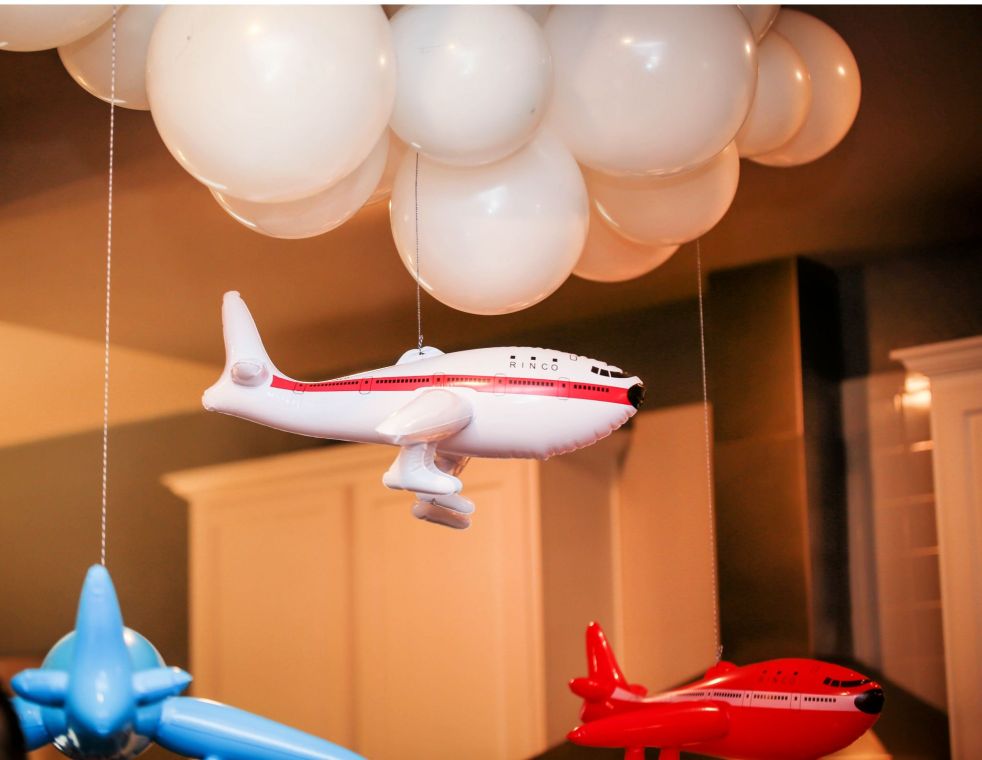 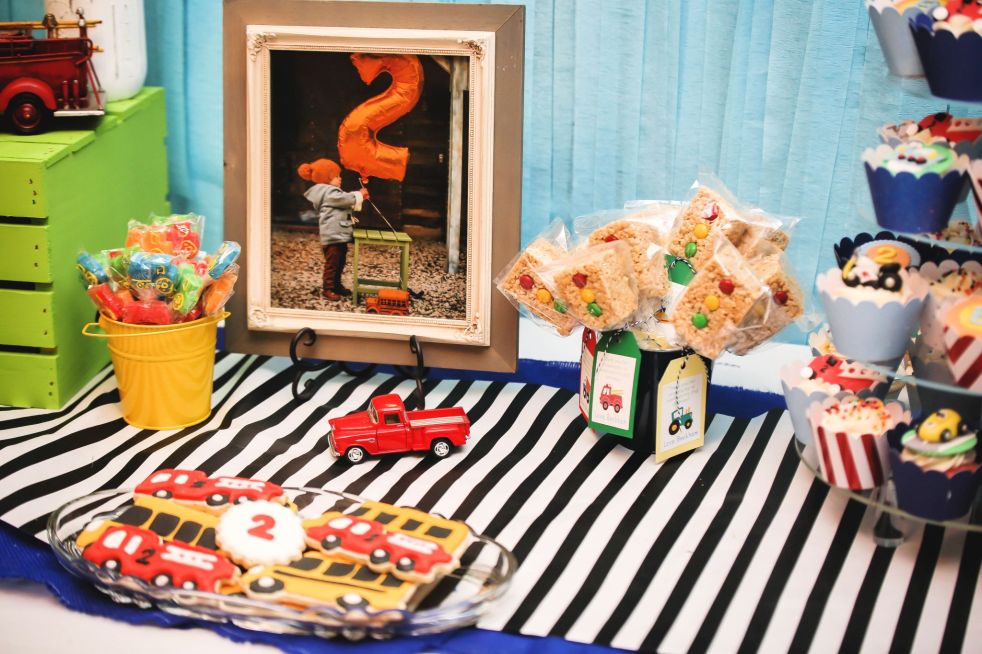 I had so much planned for this party (thanks, Pinterest), but I started a huge painting project two weeks prior to the big day. Not the best idea, but hey.. I can check three rooms off of our painting list! I was so behind in comparison to my normal party planning, so I recruited help from those who came early (sorry, yall!).

As we were waiting on all of our guests to arrive, Beckham and his cousins played on the train table he got for his birthday, and our sweet photographer followed him around getting some pictures of him in his new favorite birthday shirt (side note: I can’t wait for the day we can use bribery to make him smile on command). 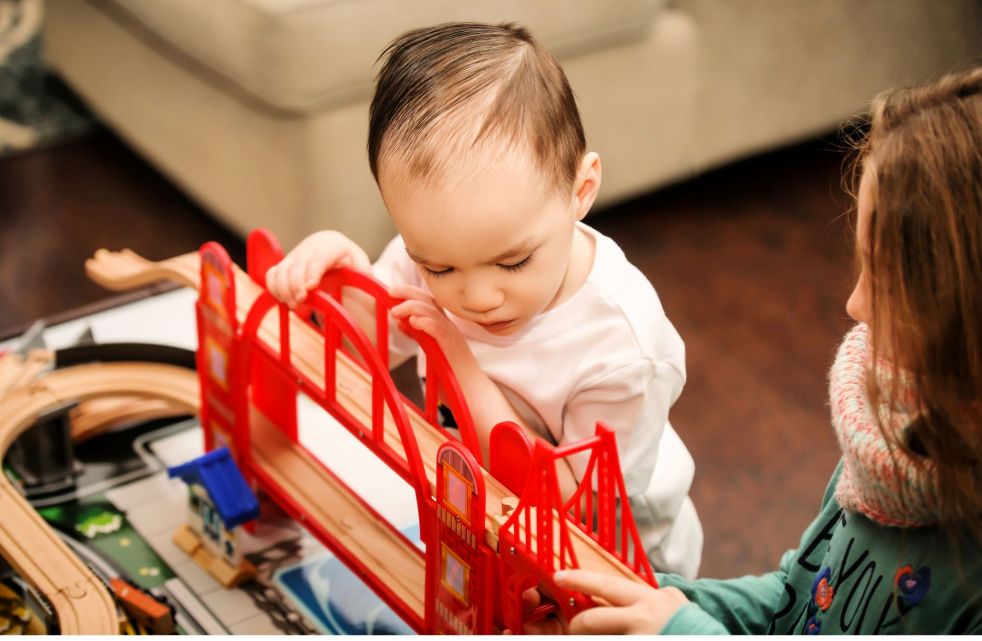 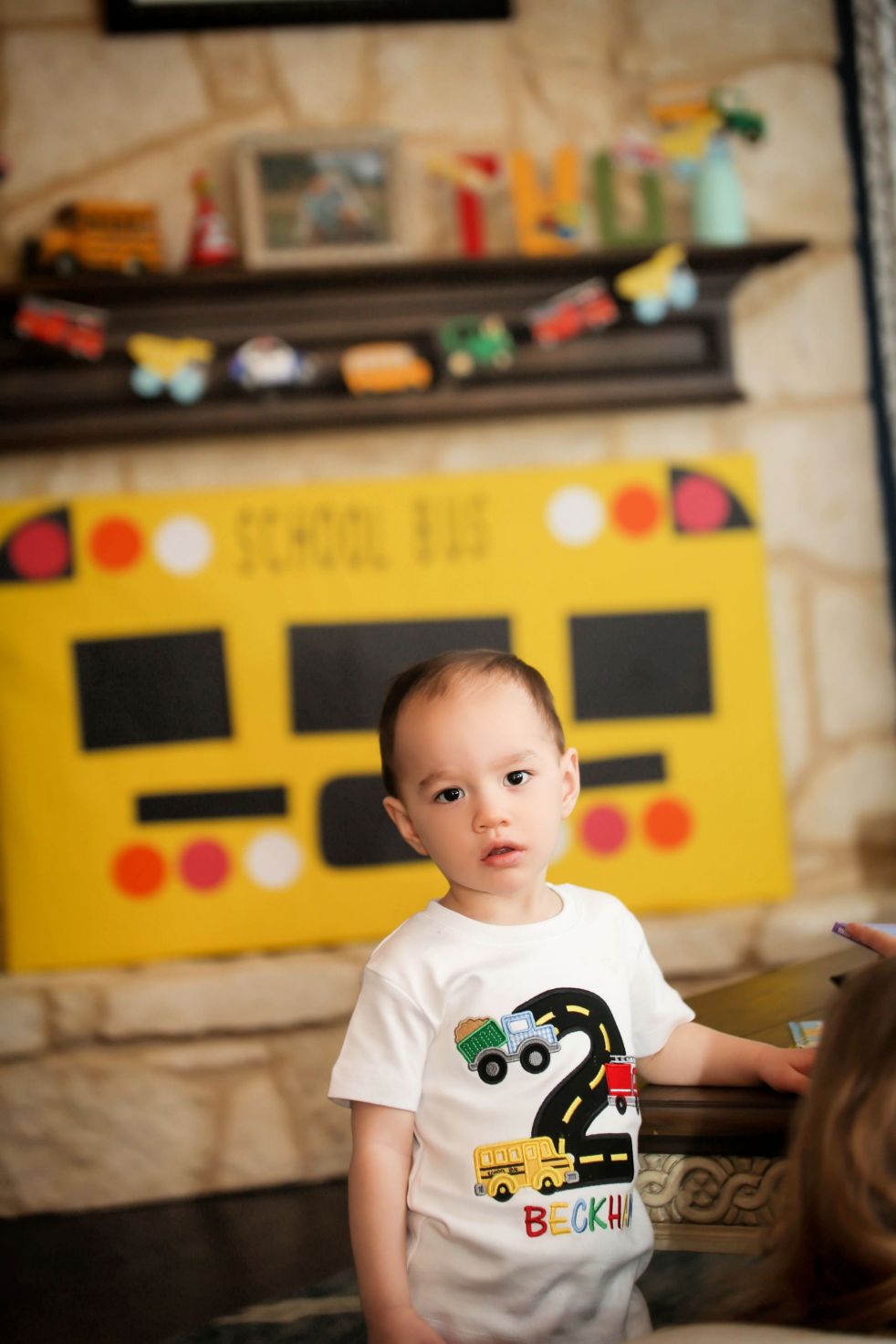 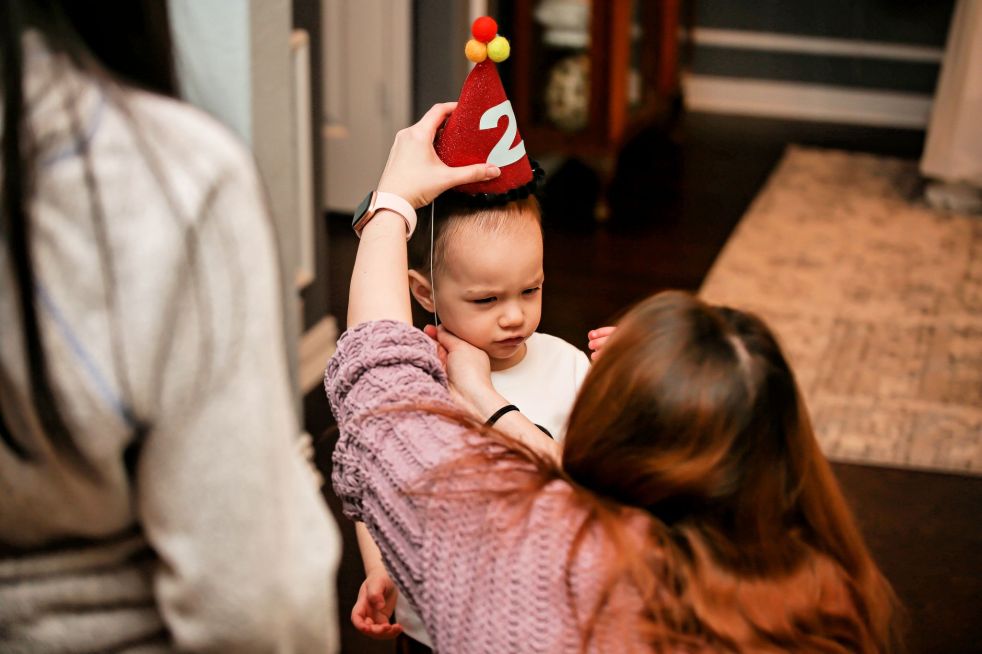 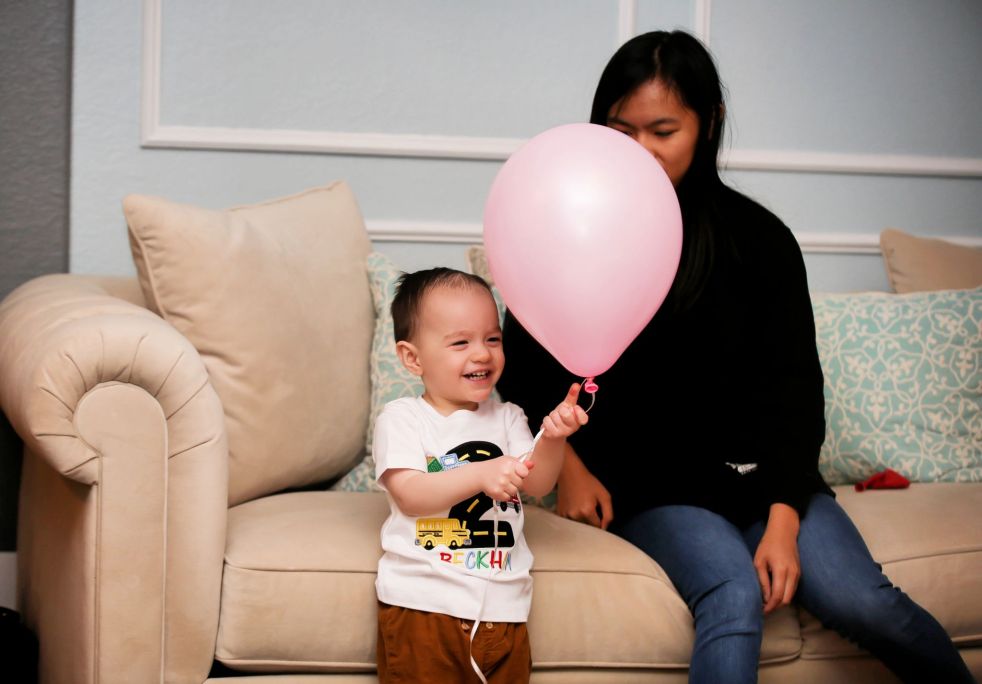 We served train/bus shaped sandwiches for the kids, mini tacos, veggies + hummus, fruit, and pasta salad in effort to keep it more simple this year. We weren’t planning on the turnout that we had, so for the first time ever, we ran out of food (worst party fear ever). As soon as we put the food out on trays, it was gone.. I guess that just means it was good!

Annnnnd… Beckham may or may not have played with his train sandwich instead of eating it.

Growing up, my mom threw us the best birthday parties. She loved every bit of it! Pinatas were a staple each year, and something I want Beckham to remember doing as he grows up. Robert found the perfect little fire truck piñata that we filled to the max with candy. I will have to say it was a first for me to hit a piñata indoors, but it was way too cold outside for all these little babes. We moved some furniture, and Robert used his man muscles as he leaned over the banister holding the piñata as each of the kids took turns hitting it. 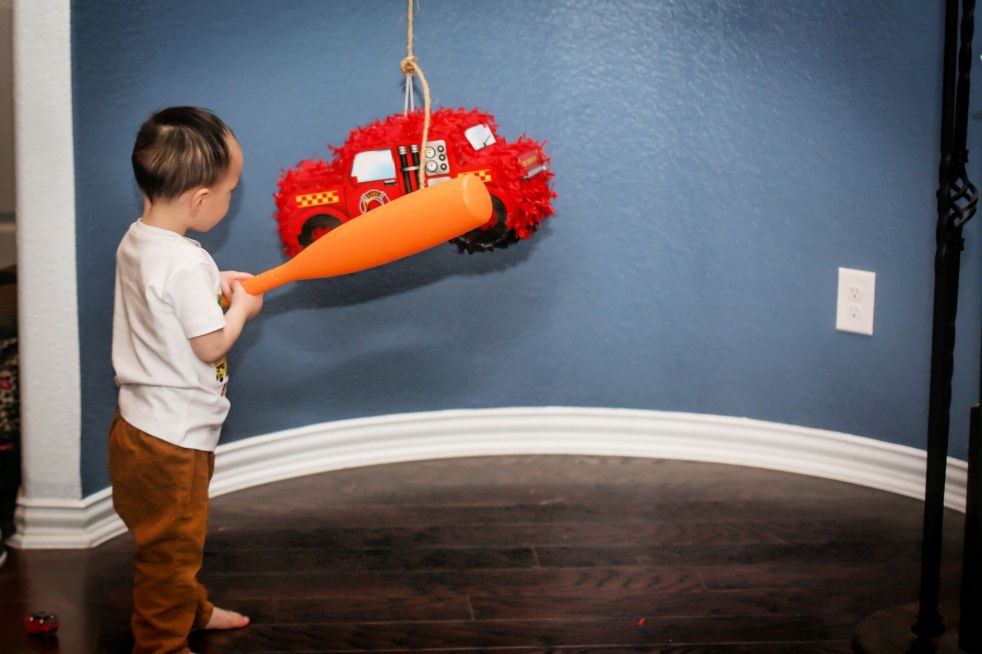 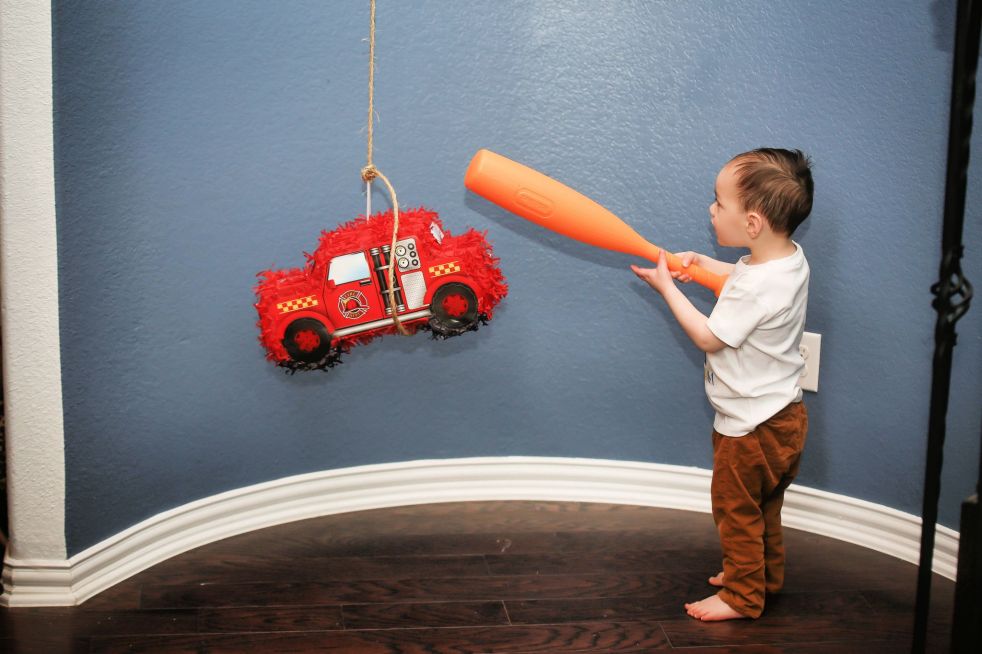 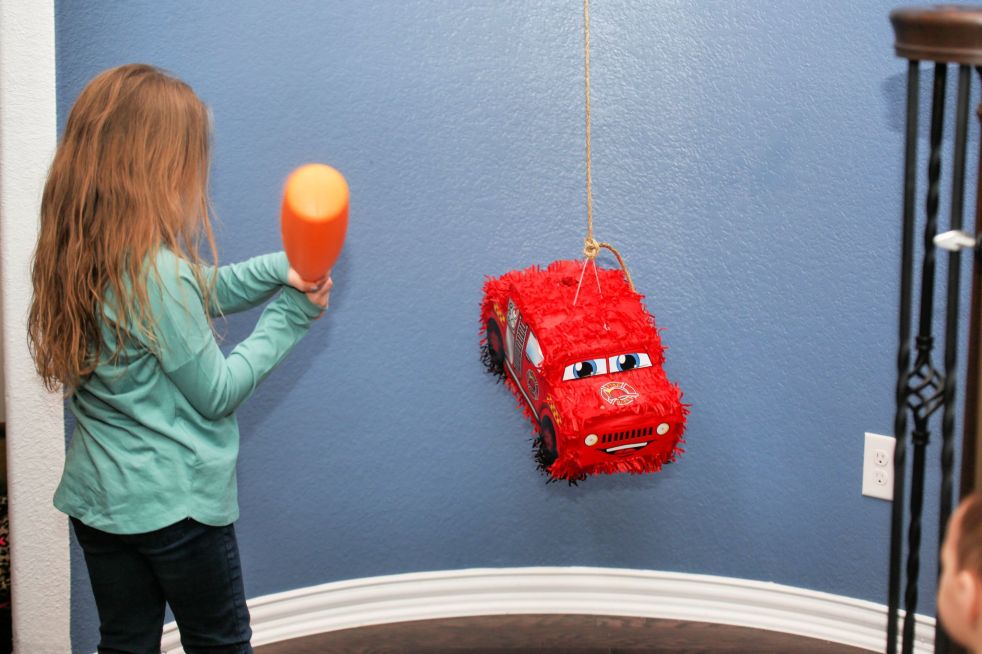 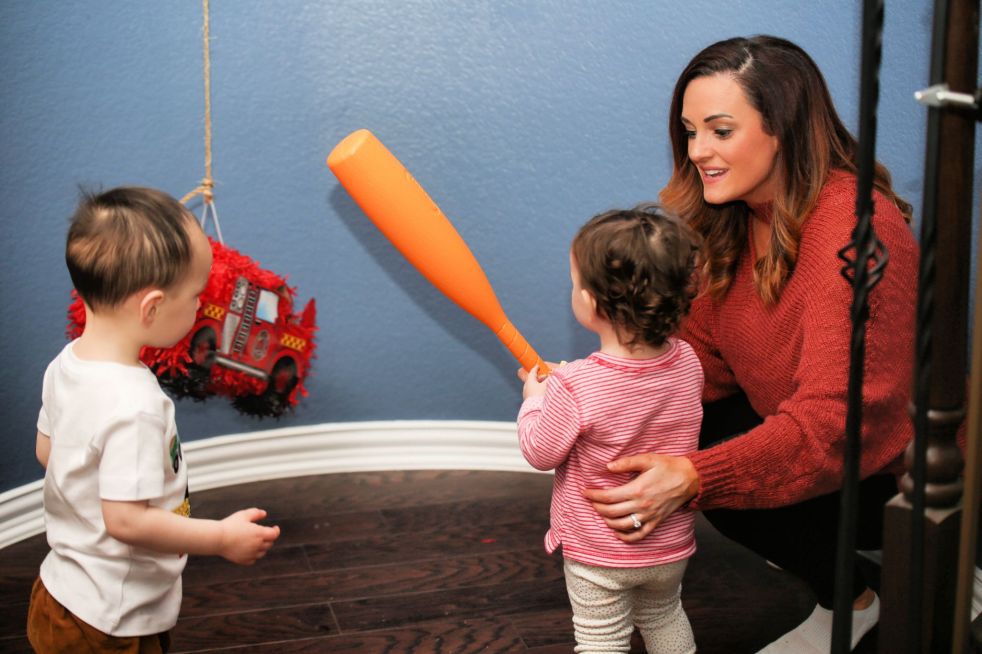 My friend’s son, Brennan, was the last up to bat. I’m pretty sure he’s going to be a future baseball star, because I mean, the kid had a pretty good swing. 😉 As I dumped out all the candy, all the “big” kids quickly swarmed in. In mean mama bear fashion, I may or may not have taken candy out of their bags for all the little kids to get a turn (note to self: little kids first next time).

Beckham sat in a pile of candy for the longest time, and I looked away as he ate allllllll the candy. It’s his birthday, what can I say?

Initially we wanted to rent a huge train bounce house and send all the kids outside to play, but the day of his party was the coldest day of the year (after gorgeous, sunny weather the weekend before). Naturally. We decided last minute to set up wooden cars with paint for the kids to paint their own cars. I’m so glad we did, because all the kids enjoyed it.. especially the birthday boy himself! 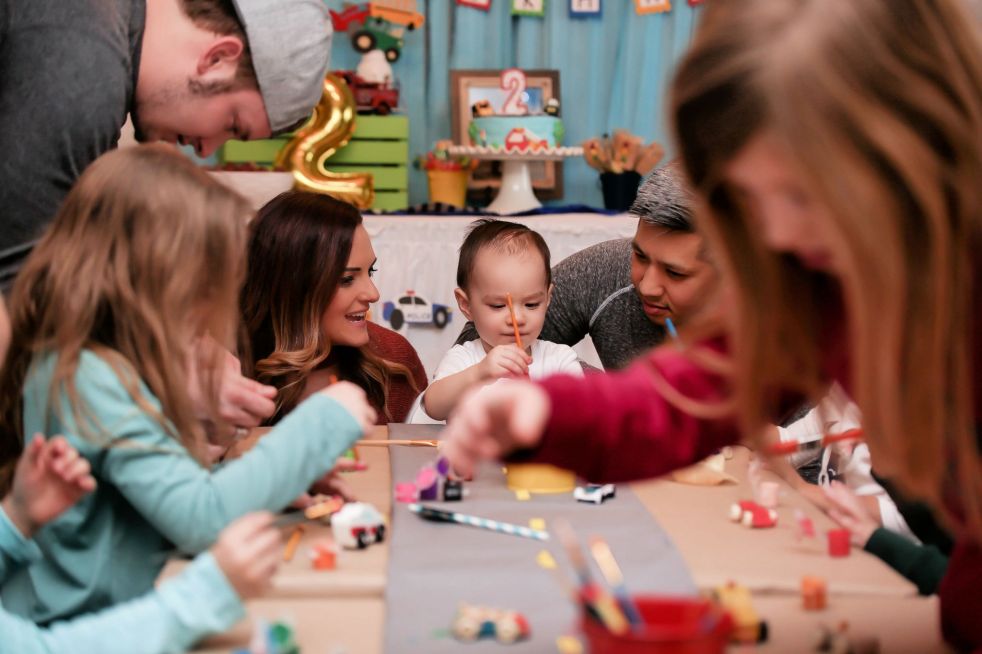 After there was officially paint everywhere, it was time for cake and cupcakes. My fabulous sister-in-love, Suzanne, made the amazing fondant cake toppers and I made the cake and cookies (Disclaimer: this was my first attempt at both, so please excuse the lumps and bumps.. ha!). My car-loving babe loved all of it! 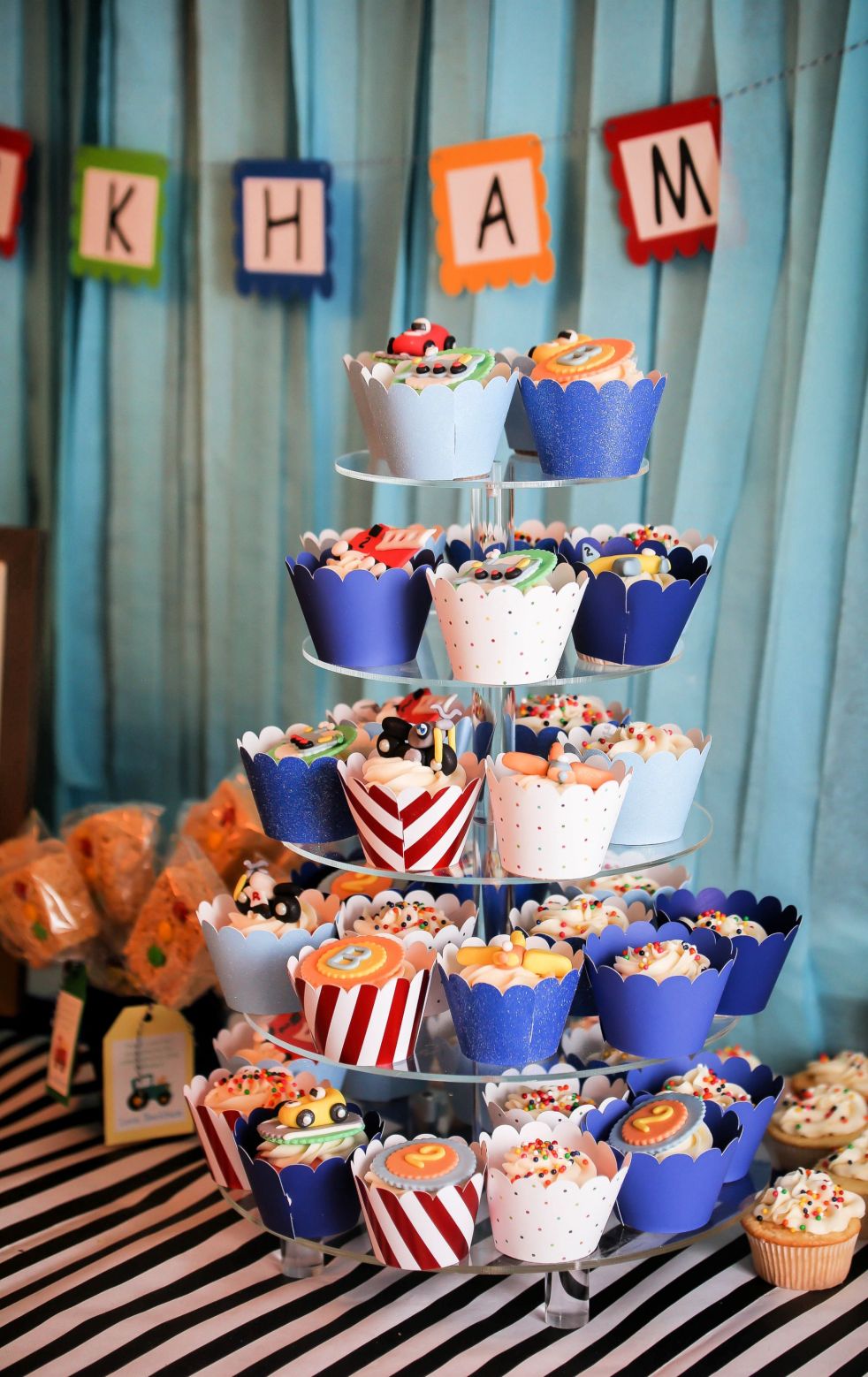 We propped the birthday boy up on the table as everyone gathered around to sing “Happy Birthday.” He wasn’t quite sure what was going on, but the way he was looking at his daddy.. melt.my.heart! 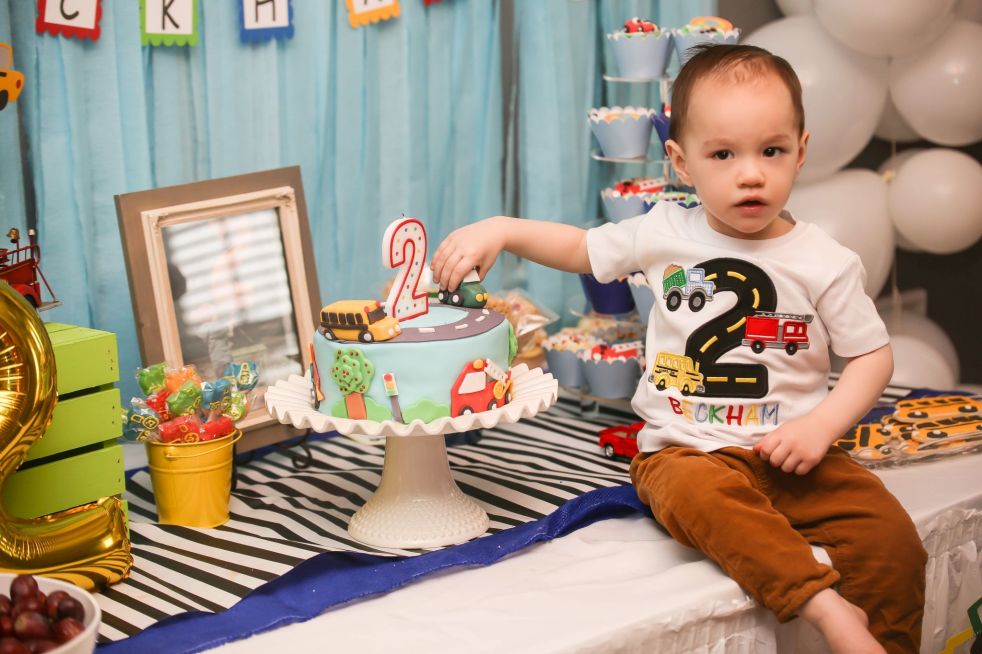 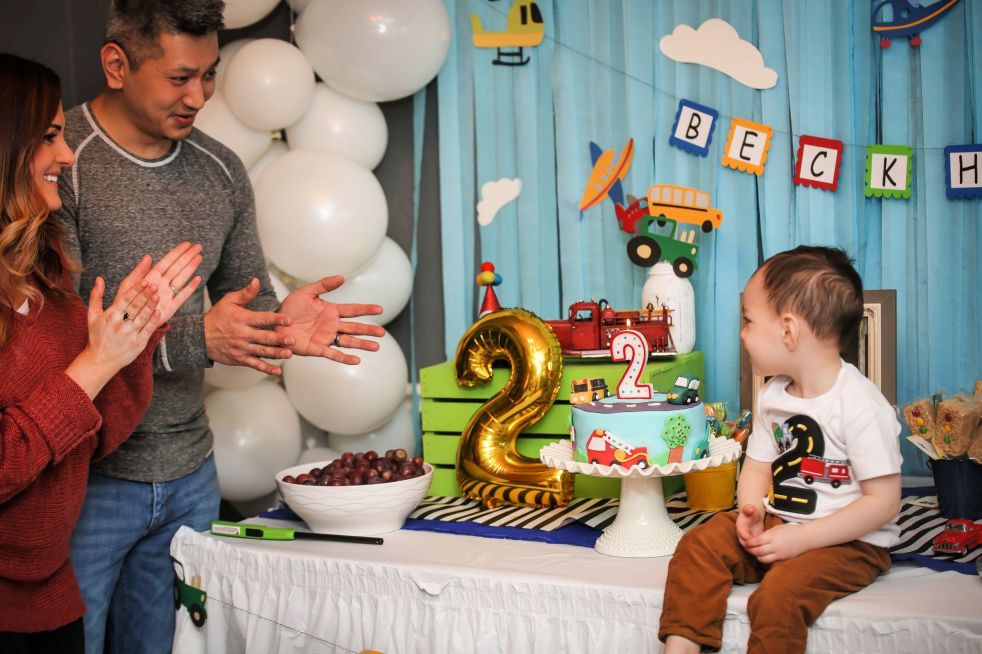 I am SO thankful for our photographer! I am working on pulling out my camera more, but with so much going on, I took very few pictures of my own. Usually I ask for a big group picture, but we skipped on that this year due to the weather and settled for a little family photo and a group shot with his cousins (we are missing three here: Cameron, Indie, and Serenity). This boy LOVES his cousins so much! 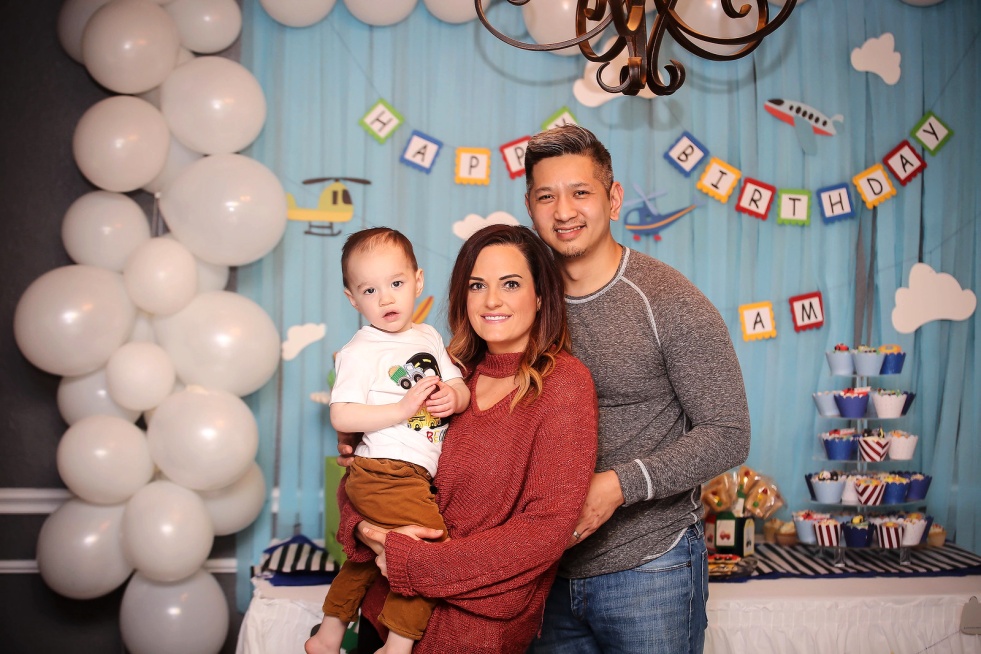 As I mentioned in my last blog, we decided to give a big gift for birthdays in honor of his three grandparents who cannot be here physically to celebrate him (Bà Nội, Grandma Rhoades and Grandpa Rhoades). He walked out on the back patio to a big fire truck waiting on him from his grandparents, and it was love at first sight! A few of his cousins took turns riding on it with him for the ten minutes we braved the cold. (My sincerest apologies to those who had to bear witness to the wrath of my angry toddler when we took him off of the fire truck to bring him inside!)

My older brother and his family stayed long after everyone left, and we just sat amongst the mess and chatted while Beckham played with his cousin, Brinley. We had the best day! 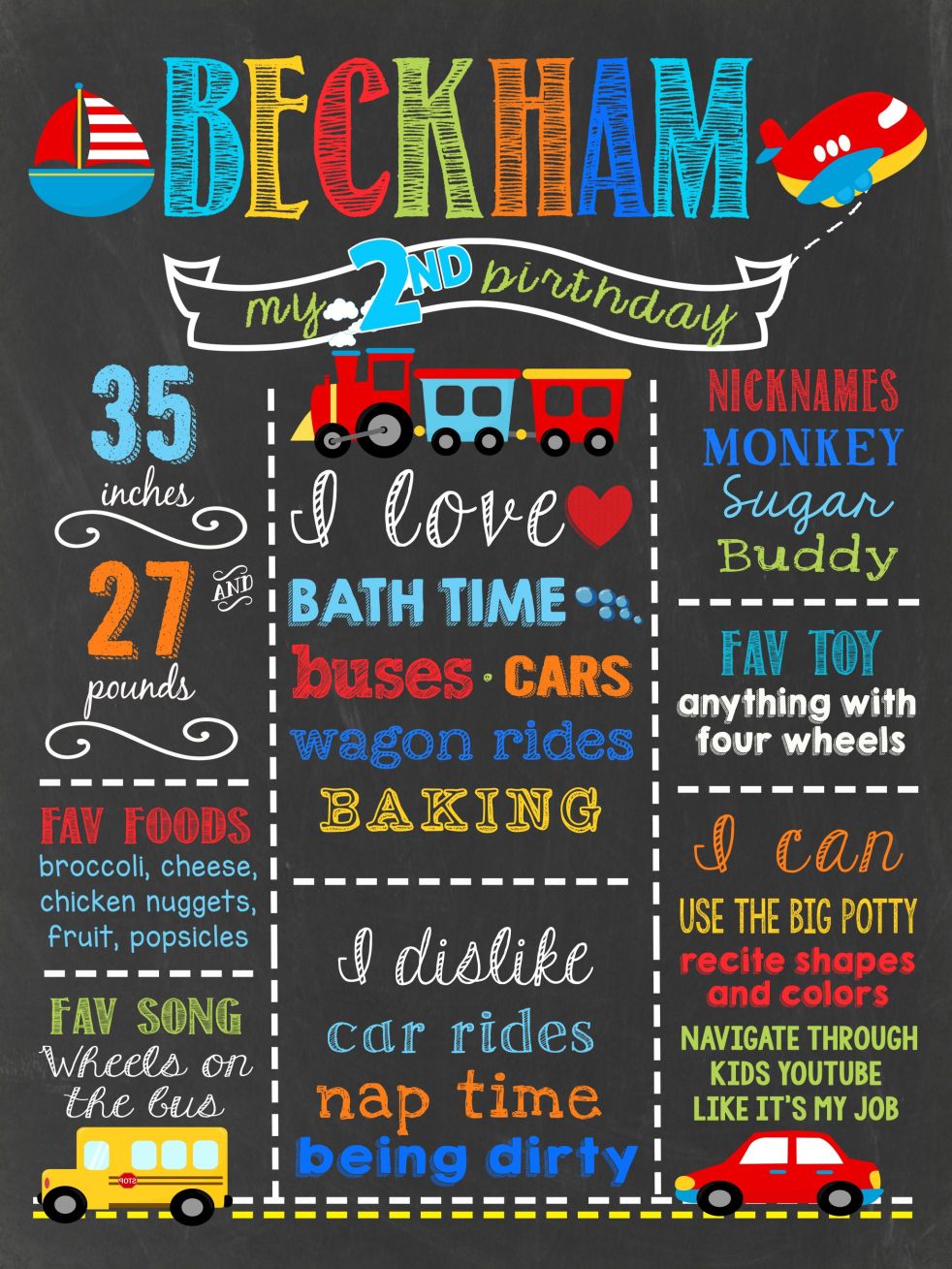 View all posts by Jenny Le